Among the 18 teams , 10 of them were eliminated after the preliminary round and remaining 8 teams competed in the finals.
Sabarinath V. S and Anandapadmanabhan representing Govt. Model HSS Ambalappuzha came out as winners after the tight six round competition, about Kerala history, culture and malayalam literature. There were 2 teams who shared first Runner-Up position, Arun AN and Gokul Krishnan R of Govt. HS Paravoor and Akshay Dileep of Leo XIII English Medium School , Alappuzha.

Sr. Sintha distributed the cash awards, mementos and certificates to the winners and congratulated them.. 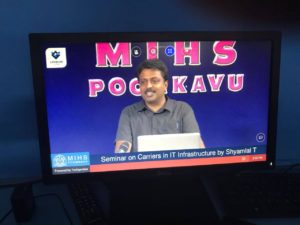 THE DAY THAT WAS